Spiky Lucy Beaded Bead was named by one of my students,
who was asking me more times to design a new spiky beaded bead :-)

Designed May 2019 for Rutkovsky Beads with their Spike Beads.

One of my biggest, beaded bead diameter is about 6,6 cm.

Star of Ishtar or Star of Inanna is a symbol of the ancient Sumerian goddess Inanna and her East Semitic counterpart Ishtar. Alongside the lion, it was one of Ishtar's primary symbols. Because Ishtar was associated with the planet Venus, the star is also known as the Star of Venus.

Classic mandala was first, but I was not happy with the shape
and I wanted to fix feather beads (they were moving.

Pendant has a groove around the middle, cavities (tunnels) were formed by joining
the opposite parts of the pendant and they can be used for a cord.

These pendants were created on my class by a group of my students (thank you, girls!).

It is possible to use various colors of Feather Beads and Ginko on each side.

Snowflakes or frosty flowers on the top of the dodecahedron modules are can be closed
and in this "stage" they are forming buds.
Vločky-kvítka na vrcholcích dvanáctistěnu je možné uzavřít a tvoří tak poupata.

Eirwen is one of my biggest beaded beads, diameter is about 6 cm. 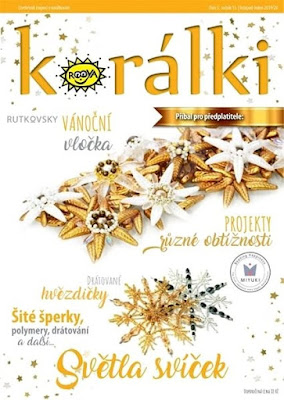